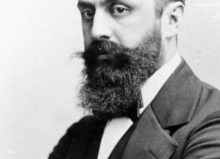 The Simon Wiesenthal center recently offered ex-president Obama a copy of a letter signed by Adolf Hitler in 1919 and known as “The Hitler Letter”. In this he stated his hatred of the Jews and his plans for the total “removal of the Jews” from the face of the earth. This original letter is the first mention of Hitler’s anti-Semitic vision and is part of the archive of the Simon Wiesenthal Center and can be seen in the “Tolerance Museum” in Los Angeles. President Obama was interviewed for the film that the SWC made about the life of Shimon Peres. In the film, Obama says: “I appreciate the great work that the SWC does and how important this work is.”

The famous American writer Mark Twain (1835-1910) wrote to the leaders of the Ottoman Empire when he heard about the plan of the Jews to have their own country: “… to gather Jews from all over the world in Palestine, having a government of their own … “You must oppose that. Twain wrote in the magazine Harper: “The Jews have the most cunning and colorful brains in the whole world”, when they are allowed to have a free, private land, this race will discover its strength….”

The brains of the Jews Twain wrote about, are part of the Jewish stereotype when Jews are spoken and written about by philosophers, scientists, writers. This is done by Jews en non-Jews.  (From: SWC, leaf: Inmotion, autumn 2017). The German sociologist and later Nazi, Werner Sombart wrote in 1911 about Jews with a mix of admiration and fear,  “… at his arrival breaks new life and in his decline everything falls into disconnection …” From: The Jerusalem Report, article : Genius: Spiritual Zionism’s great opportunity; page 9.

In that period, people like Judah Magnes expressed their voices as Spiritual or Cultural Zionists who believed that Israel had a gift to serve the whole world, precisely because of their intelligence. He became one of the founders of the Hebrew University of Jerusalem together with Albert Einstein, Sigmund Freud, Martin Buber and Chaim Weizmann. This university became the jewel in the crown of Cultural Zionism. Jewish people from all over the world came to study at this university.

After the terrible tragedy of the Shoa and there after the foundation of the State of Israel in 1948, we have seen enormous intellectual development in the now 70 years and the world has benefited from many inventions done in Israel: solar energy, drip irrigation, navigation system: waze, many medical inventions and medicines against Parkinson’s, etc. Regarding the rise in our days of a strong anti-Semitism resulting from the so-called conflict between Israel and the Palestinians, we see that the fear and hatred of the Jews as described at the beginning is still alive as it was in 1910 and for which Marc Twain warned the world.

Then there was no State of Israel and there was the fear of Jewish intelligence. Now we read in the Jerusalem Post Report that the very intelligence is a means of Israel to show the world that it can help the world and peoples and be a blessing.  In the world of diplomacy, we see that Israel ties more than ever with countries such as South America and Africa.

Women who do not have to walk tens of kilometers to get water from a distant well, but can now purify water that is close by: an invention of Israel. These women are very grateful to Israel. All these inventions are beautiful and useful, but the knowledge of Torah and the application in our lives is deeply the secret of Israel being the chosen people of the Lord.  Psalm 119 verse 100 “I have more insight than the ancients, for I keep your orders. Verse 130: “The opening of your words spreads light, it gives the unwise insight.”