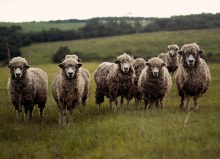 David the Shepherd
In the Bible you come across leaders such as King David and some prophets who were shepherds. It turns out to be a very good background for dealing with people. We are not compared to sheep for nothing, we have a lot in common with sheep. Take David to start with. Samuel was sent by the Lord to the home of Jesse to anoint the future king. All the tough and handsome brothers passed by, but the Lord let Samuel know that he was not among them. When Samuel asked, more or less surprised, if these were all the sons, he was told that there was another boy. This one was not called up, because it was thought, “ah that sheep shepherd is not important enough”. G’d thought otherwise, however.

In the place of Saul
When David was finally called, the Lord announced that this was the man to be anointed as king in the place of Saul. David became the shepherd over Israel. It was a time of agriculture and herds of cattle in those days. That is why many examples from those practical basic concepts are used in and around the Festivals and the seasons. Language that everyone understood. King David and his practical training as a shepherd, what can this education help him as future king? Do not think this, because a short study on sheep keeping shows that apparently tame sheep can hide a lot under the wool. If you are not a good shepherd, the flock will show a range of defects in no time. The trained eye of David could see at a glance what kind of meat he had in the flock. Anything in common with humans?

The behavior of sheep
What does a shepherd need to know about the behavior of his sheep? In sheep, one must be aware of the correct diet and its composition. Fresh and good grass with healthy herbs, alternated with powerful food. Regularly move the herd to fresh grass to prevent parasites from entering. A safe pasture where he could see them and intervene if predators were involved. He defended his sheep with his life and killed many a lion or wolf with his own hands. If a sheep unexpectedly fell ill, he quickly isolated it. He kept an extra eye on too fat sheep. These were in the habit of pushing the weaker sheep away and taking the best food themselves. Apart from the fact that fat sheep sometimes suddenly fall over, too greedy and too busy for themselves.

Comparison between people and sheep
Sheep that grazes on their knees all day long suffer from foot rot. A person who is only busy with Gd all day and therefore does not provide an own income is therefore crippled. It can be deadly if sheep fall on their backs. They can no longer get up without help. Worship in the Bible or awe of the Eternal is expressed in the Bible by falling on the face. The soldiers who captured Yeshua fell backward in terror. A sheep that shows a swollen belly in a short time have eaten the wrong food, sometimes with the wrong poisonous herbs. People need to watch their spiritual food and where they eat. Knowledge can blow up and is of no use.

Characteristics of a healthy herd
Sheep from a healthy flock first went through a water bath upon arrival. The legs are inspected separately and in case of foot rot, the infected parts are cut out and treated with a strong disinfectant. Later in the season, the legs of all sheep are again checked and washed. Every year the whole herd goes through a water bath to prevent or eliminate pests in the skin. A good shepherd will see from the position of an affected sheep that something is wrong and will intervene quickly by immersing the animal again in a disinfecting water bath. Keeping sheep seems simple, but it is an extremely intensive process that requires a very attentive shepherd.

A good king and his people
A nation perishes for lack of knowledge Hosea 4: 6. You could say a lack of Torah. David was instructed to study and even write the Torah daily. The handbook for us humans. Likewise, he had the knowledge of how to handle sheep and see their abnormalities. So, a good king must have knowledge of Torah in order to better rule his people. Apparently healthy people can make a sham. As with the fat sheep, they often push the less strong people aside to be in the foreground themselves. Strange teachings with pagan influences can degenerate into a kind of hysteria with a lot of screaming. People who withdraw and are much on their own too often lose themselves in delusions. Their worldview is not grounded in reality. Sheep that withdraw from the flock are always sick.

David the ideal king and forerunner of Messiah
Yeshua is called the Good Shepherd. Psalm 23 sings about him. A song written by David to show us what a good Shepherd does. He watches over us and if we can’t do it for a moment, He carries us in His safe arms and comforts us with great care and love until we can continue on our own. When false teachers come into the church, a good shepherd will deal with or even remove them. Yeshua the Messiah watches over the flock and will build the congregation if we follow and trust Him. Sheep know their Shepherd and meekly follow and chew the precious food. Church members are served good confrontational meals.

Infectious sheep
If we do not take it greedily and quickly, but take it thoughtfully, chew it well, and chew the cud later, the congregation will grow into healthy members. The good food will then be able to do its work and the sheep will produce healthy fruit. They bring benefits to the shepherd in the form of unity and docility. And healthy children (lambs with sheep) so that the church can continue in the next healthy generation. Unhealthy bloated members leave the flock of their own accord, the Shepherd sees to this. Infectious sheep with false doctrine can cause a lot of damage and sometimes drag half a congregation out of the congregation.

One Shepherd and one flock
Different flocks will no longer exist in the Messianic Kingdom. Every human being will live under a Shepherd, the Messiah Yeshua as King of kings. He will shepherd us with a steady hand. Sheep that does not allow themselves to be cleansed in water and forgiven by His blood are not allowed into His Kingdom. Lameness will not exist. And there will be great peace under His leadership. And King David as a shepherd will reign under Him. We are in extremely reliable hands. Both know their sheep and have taught them to know Them and to follow them in peace and surrender. We are in safe hands. May His Kingdom come soon and in our days.