A great miracle happened there 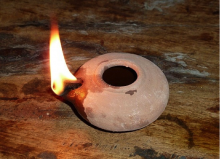 This week we are going to celebrate Hanukkah, Feast of lights. In our congregation all sorts of preparations are made ​​for an extra festive gathering. The children again make a contribution and I heard them  practice songs and drama. There are baked goods in oil like soefganiot (sort of Berliner dumplings with jam) and other baked goodies for the coffee. In the afternoon there is a cold buffet with homemade kosher pies, salads and according to tradition, there will also be latkes(potato pancakes). And everyone can bring his chanoekia, so we can light our own candles.  I myself have a silver chanoekia candle for this special occasion. Mine is in the shape of a harp, which I received as a gift from a former colleague several years ago in Israel.

It looks beautiful in the congregation when all those chanoekiot give their light  together and it’s a very special atmosphere. Also a nice mental image, because Yeshua requires us to shine our light so that people will see our good works and glorify our Father in Heaven. That reminds me of a visit to Nazareth in Galilee Village, an open-air museum, where the Nazareth from Yeshua’s time is recreated. Every visitor gets an oil lamp, as they were used at that time with a wick of flax. At home I added olive oil and lit the little lamp and I was expecting a nice solid light.  However, I noticed that the huge wick luffed. I suspect that the wick was not sufficiently saturated with oil, apparently this takes time. What was disappointing as well was the lamp appearing to be porous because the oil was leaking through.

And then I see a spiritual lesson. After all oil is a picture of the Holy Spirit. G-d wants us to give His Spirit to teach,  to encourage and to correct. He offers it freely to us and gives it with a question:  “If you then, being evil, know how to give good gifts to your children, how much more will your Father in heaven give good things to them that ask him.” But if I only have spiritually little ‘oil’, I do not give a warm light, but smoke. It takes time to have G-d’s Spirit in all parts of my life to live and to grow in confidence. When my lamp fails to hold the oil and if I let oil leak and not refill my light it will go out soon.

Why is the lamp porous? It does not seem to be baked in fire. Someone offered to bake the lamp. When I got it back it was less porous, but still not right. It will be baked again. Like my little lamp I also have to undergo the ordeal, my faith in God is tested in a variety of circumstances. Do I remain faithful to G-d’s precepts, even in opposition? Do I treat my neighbour as I would like to be treated myself? How do I respond to adversity? If I stay connected to G-d and His Word, will I ask him for advice?  When I am spiritually nourished and my soul is filled with goodness and is loving, then my light can shine. So it was with the five wise girls from the parable of the Kingdom of G-d, they had enough and were ready with their oil -burning lamps when the bridegroom came, and they went with him to the marriage feast ( Matthew 25 ).

Thus, the Maccabees showed their loyalty to G-d and Torah and because of their victory the feast of Hanukkah is observed. In the year 167 before the Common Era ( BCE ) the Jewish people are threatened with extinction. This time it is by the Syrian king Antiochus IV Epiphanes. He does not tolerate that het Jewish people practice their religion, including circumcision, Shabbat and kosher meat is forbidden, on the punishment of death. Antiochus plundered the temple and threatened and killed the Jews. Torah scrolls and Jewish scriptures were burned. He also directed a devastating abomination, on top of the altar, to sacrifice in honour of Zeus, pigs. Then the priest Mattathias, a Hasmonean, started a rebellion. Judah Maccabee called: the hammer,  became the leader after his father was killed. He cries out to G-d for mercy and help and his men go with fasting and blowing the shofar.

The force of the enemy of Israel is strong and very fierce, but again and again Judah is trusting in G-d, because, he says, not the number of combatants determines the outcome of the fight, but the heavens decide! And G-d gave them victory! On the 25th of the month of Kislev (164 BCE ) the Temple and the altar are rededicated during eight days, as in the original dedication of the temple. The entire nation is grateful and delighted. From that moment the Maccabean priests decide that this  should be now celebrated for eight days each year. In the Talmud we read what the immediate cause is of this celebration is the great miracle that there was only one jar of kosher oil found in the destroyed temple.

The amount of oil found was only good for one day. But the miracle was that the oil in the lamps kept burning during eight days in stead of one. After 8 days the Temple and the altar were rededicated. Now there was also new kosher oil available for the temple candelabrum. G-d ensures sufficient supply of spiritual oil, as we show loyalty and commitment. We celebrate Hanukkah by lighting every day one more candle till all lamps shine on the eighth day of the feast. We put the chanoekiah candle in the window, so everyone can see our light. May it be so, that we ourselves are a visible light, which is growing every day to the glory of our G-d. Chag Sameach!