Hanukkah and the Messiah 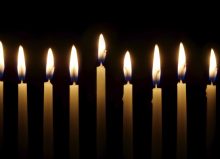 Hanukkah and the Messiah

These days we again celebrate Hanukkah and thus commemorate the courageous struggle of the Maccabees against the regime of Syrian-Greek king Antiochus Epiphanes. This ruler wanted the Hellenistic culture to impose on the inhabitants of the land of Judaea, and forbade all commands that Adonai had commanded, and vice versa: The Sabbath was not to be celebrated, boys were not to be circumcised and the dietary laws were not to be respected. However Antiochus sacrificed pigs in the Temple of the Lord.

Yet this ‘new culture’ was being brought in a very acceptable way: the beauty of the human body was idolized and cultivated, gyms were established everywhere  to train the muscles togrow into a ‘divine’ body. In these gyms, men who did the workout were naked and even next to the Temple of the Lord there was a gym. Jewish people were being tempted to go there. This worked reasonably well, especially young people and highly respected Jewish men followed the new morals and this new way of life.

Still, most of the people were faithful to Adonai, especially the elderly and those living in rural areas. The king sent soldiers to the villages to ensure that the new ‘order’ was used, with the sword they forced people to commit their idolatry. Many refused and flew. Luckily Mattityahu and after his death his son Judah with a rapidly growing army  fought to live as G-d wanted them to live.  In the year 164 before the common era, they went inside Jerusalem, freed the city from the oppressor Antiochus and his army and cleansed the Temple and dedicated it again.

All is well that ends well! But imagine that these Jewish men would not have had the courage to use their army to fight for the G-d of Israel tot their calling to serve Him. What would have happened if these courageous men would not have fought and given their lives. What would have remained of the knowledge of the Lord, and His covenant promises?
What would have happened to the angel Gabriel, who was sent to the town of Nazareth? Would it still have been possible to find a girl with the name Miriam?

How would they have known anything about Adonai’s recovery with the world and the promise of the birth of the Messiah in the prophecies? Would the Redeemer of Israël and the world: Yeshua been born? By the way: you know that December 25th has nothing to do with the birth of Yeshua? And also: Adonai has not asked his followers to celebrate his birthday but – read 1 Corinthians 15 – rather His death and His resurrection from the dead.