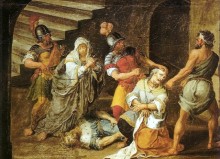 The Greek emperor Antiochus IV (215-164 BCE) forced the Greek religion oppressively upon Israel. This meant: kosher slaughter was forbidden, circumcision of the Jewish baby boys was forbidden, and observing Shabbat was forbidden. Exactly those matters which are still forbidden with aversion and disapproval by some political and spiritual leaders in Holland toward Jews, among whom Messianic Jews. The Jewish priest who was member of the Hasmoneans, named Mattatias, started a popular uprising. In 166 BCE he won form the enemy. The Jewish troops enter Jerusalem triumphantly and organize the ritual cleansing of the Temple.

The services in the Temple of Jerusalem were restored and Jonathan Maccabaeus (member of the Maccabees) became the first high priest. Part of the restoration of the services is lighting the Candelabra in the Temple. But at that time the oil needed for it had been defiled by the dirty Greek hands. That is to say: one small container appears to exist, good for one day of light in the Temple. But pressing olives to produce oil takes eight days. By miracle this little bit of oil becomes enough for eight days. This way the Lord offers enough time to make new oil.

The fact that the spiritual and ritual matters concerning the Jewish religion irritate leaders like Antiochus so much shows the interest satan has to destroy the beautiful instructions of the G-d of Israel. And which interest the Lord has to maintain and preserve these beautiful matters. The excellent Jewish feast of lights, definitely not to be confused with the lights of Christmas and the tradition hiding under it, shows a very tragic aspect: the thousands innocent Jewish victims who were tortured, skinned alive and burned alive by Antiochus who had become a dangerous nutcase.

Let us realize that Yeshua never abolished the Law, read Matthew 5:19. And that Paul observed Shabbat (Acts 13:15-48; look at the non-Jews who are touched by Shabbat) and offered animal sacrifices (Acts 21:26). Yeshua who walks in the midst of the Jewish traditions, celebrated Hanukkah as well. We read about Him visiting the Temple on mid-winter Hanukkah in John 10:22. The lights of the Hannukia, candelabrum for Hanukkah, are lit increasing daily in number during this feast of eight days. This way the miracle is symbolized of the oil which rendered fuel for eight days instead of one. Victory on all fronts. That is worth a celebration.