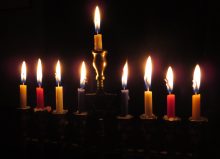 Celebration of Hanukkah
The biblical month of Kislev is the month in which the festival of Hanukkah is always celebrated. During the period of the Second Temple, which had been rebuilt by Ezra and Nehemiah, the Greeks, under the gründliche leadership of Antiochus IV, invaded Israel. These hostilities against Israel had begun from the time of the anti-Semite Alexander – around 330 BCE. – who allowed himself to be called “The Great”. The Greeks had enacted many absurd laws against the Jews. The Jewish religion – offensive to these and all enemies of the Eternal – was forbidden.

Statue of Greek god in the Temple
The study of the Torah was forbidden and the exercise of the mitzvot, the commandments, as well (see 1 Maccabees 1:45). Money and possessions were confiscated, apparently not offensive; neither were their daughters! The original name of this ruler was Mitradates, which means given by Mitra, the Indo-Aryan name for the sun god. In 175 BCE this madman, therefore also called Antiochus Epimanes, took the throne. Ten years later, he placed an image of the Greek supreme god Zeus in our Temple (1 Maccabees 1:54).

Well-known Christian leaders
The hatred for Israel, against Jewish customs and against the G-d of Israel still persists. The lesser aggressive form of this is using the title legalistic, to indicate that keeping the commandments of the “Old Testament” is wrong. Messianic Jews are accused of being immature, when they are “zealous for the law” (see Acts 21:20), “as immature as the Jews who do not know Yeshua,” you hear from well-known Christian leaders.

King Josiah
What is going on? When the Spirit of the Eternal actually touches people, the sacred desire arises to become clean for the Eternal. Own sinfulness becomes visible and the so necessary cleansing process begins. In addition, the desire to follow the commandments of the Eternal grows, as we have seen with King Josiah, who as a Jew had not grown up with the Law (the Torah), but who came to love heartily (read 2 Kings 22).

To show love is to do commandments
Shaul (Paul) also loved the Law (Romans 7:12, 14; 1 Corinthians 7:19). Yeshua says we love Him when we keep the commandments (John 14:21). In his first letter, John calls those who do not keep the commandments liars (1 John 2: 3-4). The biblical commission, then, is to reach for that holy touch of the Eternal One that compels us to purify, sanctify, and do the commandments as a basis for it.

Temple service restored
There is a great battle going on for the Torah, the commandments of the Eternal. The abolition thereof, whether or not accompanied by the burning of sacred writings, as we had to undergo during the last world war, is blasphemous. What we need is the oil from above, the anointing with the Spirit of the Eternal. On Hanukkah we celebrate that the Temple service was eventually restored and that pure oil could again be used to burn the Ner Tamid, the eternal light of the Temple candlestick.

Victory over the darkness
That is the sign of the Spirit of the Eternal present that is the interface, the connection with G-d’s wisdom, through which we learn to judge the commandments spiritually. “An unspiritual man, however, does not accept what is of the Spirit of the Eternal. Such a person calls it folly. He cannot understand it, because it can only be discerned with the help of God’s Spirit” (1 Corinthians 2:14). For eight days we are going to light lights to celebrate our victory over the darkness. Enjoy your bright Hannukah!