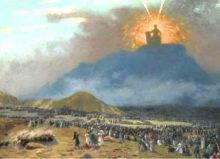 Shavuot
The Feast of Weeks (Shavuot) is the culmination of the confidence that Adonai gave to created man (Adam), but that was so cruelly violated by us. After all, Adonai had created humanity out of chaos (The earth was desolate and empty) for the purpose of serving and obeying Him. If we didn’t answer to that goal, we should go into chaos again. And that has also happened. What a faith in us humans to test this obedience again, with that first Feast of Weeks around Mount Sinai. The means of obedience is the Torah. The Feast of Weeks is thus a restoration of what Adonai already wanted to accomplish in Paradise. And the recovery has started from that first Feast of Weeks.

Mission
Hence the command, just before the Ten Words (popularly called the Ten Commandments, but see Exodus 34:28), to be a nation of priests. Israel, chosen from among all nations, was commanded to lead the world back to this paradisiacal situation of total obedience. And whoever worships this same G-d of Israel and wants to obey Him is “born in Israel” (after Psalm 87). Five days before Israel received the Torah, she was given this priesthood commission. It is the essence of the message of the Torah. Because by this we understand that it is not only about obedience to a system of regulations, but to fulfill a mission on which the existence of the world depends.

Togetherness
The first ten generations of humanity disobeyed G-d’s guidance and commands. In Noah’s time, G-d’s response to the great flood was still gracious. But the generations that followed were also disobedient. Instead of Adonai’s image carrier, man wanted to be God himself. And people, especially in municipalities, still fight leadership to increase themselves. But at the same time, a man is at that moment becoming a slave, a slave to his own lies, manipulation and disrepute towards Adonai. What faith and confidence Adonai has in re-engaging with Israel the image-bearer and priesthood. And what a grace to add the Gentiles to that. The Jewish people have a great responsibility to fulfill that calling. And what a respect and solidarity it takes from non-Jews to serve that one G-d together. What damage do people cause when they disturb that precious unit. And what a wonderful peace there is when that unity is strived for.

Three
The Feast of Weeks is a party that has to do with the number three. The Tanakh, the beginning of which we received – the Torah – at this festival, is a unit consisting of three parts: Torah (the books of Moses), Nevi’im (the Prophets), and the Ketuvim (the Holy Scriptures) . The month in which the party takes place is the third, namely Sivan. It was the month when the children of Israel came into the wilderness after their flight from Egypt. The people divided into three parts: kohanim (priests), Levites and Am HaArets (the people). Israel was led out by a man who was his mother’s third child, Moses (Moses), who was hidden for three months to protect him from infanticide. In addition, the Torah was given on the third day of abstinence, see Exodus 19:16. Thus, at this festival a bond is created between three parties: the Spirit of the Eternal One, the Torah and man.

Trusting again
Such a correspondence of numbers is no coincidence. But we also shouldn’t see more than what is in it. Adonai points out that important matters are divided into three. For example, the Feast of Weeks is apparently very important. In many ways it is clear that there is a connection between the first festival, namely Passover and this festival. It is after the flight from Egypt that Israel is in the desert, and then receives the Torah. How could Adonai regain faith in humanity? Because Israel had endured and humbled the humiliating ordeal of Egypt. And because it had also managed to apply the blood of the lambs correctly. There was a new, right attitude of a people toward their Creator, that of submission and obedience. And yet everything did not go by itself and in total harmony. But a foundation had been laid on which Adonai wanted to continue.

Deepest desire
This basis was a condition for Adonai to let His Spirit dwell in His people. Without His Spirit, no one is able to obey God’s Word and thus His will. It is he who wants it and works it. And so it came to pass that on the first day of Pentecost (Feast of Weeks), there at Mount Sinai, Israel responded as follows: “And all the people answered with one accord: We will do all that the Eternal One has spoken” (Exodus 19:8). The struggle to actually do that has always remained with Israel. As it is in every other human being. So there are always people who want to follow Adonai and give further shape to His assignments. So it happened that on Feast of Weeks (Pentecost) 3793 – the year 33 of the common era, if that is the correct year – a number of such obedient Jewish men could experience the miracle of Shavuot, Feast of Weeks again. They too were humiliated and humbled. They too had understood how to use the blood of the Passover lamb. The Holy Spirit took possession of them. It became their most sacred and deepest desire to carry out the commands of the Torah. It became their ultimate desire to please Adonai because they had received His grace of atonement and His forgiveness of sins. And they taught everyone who wanted to hear the difference between ordained and ordinary.