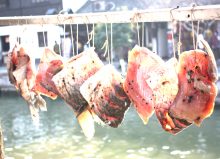 Where does the coronavirus come from?
The virus is suspected to have been transmitted by an intermediate host before it reached humans. Scientists think the host was a pangolin, a termite eater that came in contact with a bat’s feces. The pangolin is a delicacy in the land of China and this is possible in the meat market with poor hygiene in Wuhan. The pangolin is the most widely traded wild mammal in the world. For example, in January 2019, 9000 kg of pangolin scales were seized in Hong Kong. That’s about 14,000 animals. The following month, 33,000 kilograms of pangolin meat were discovered in Malaysia and another 14,000 kg of scales in Singapore in April. Bats aren’t the only carriers of viruses. Up to 75 percent of the new diseases that have affected humans in the past decade come from animals according to ‘Bioveterinary Research’ in Wageningen in Holland. Infectious diseases that are transmitted by animals are called zoonoses. Many of the infections occur close to home. In the past thirty years, for example, we have moved from one crisis to another due to an animal disease, or food scandal, which has put the lives of people and animals at stake. Think of mad cow disease, avian influenza virus H5N1, MERS coronavirus, African and Mexican swine fever, Q fever and SARS.

Coronavirus and animal trade
The new Coronavirus (officially COVID-19) from China was probably caused by the meat trade and this virus is only the last mutation of this strain of coronaviruses. Animals get sick because of the way people keep them: globally intertwined, intensive and large-scale. With gigantic numbers of animals for consumption: 70 billion per year, not including fish and shellfish. With great emphasis on maximum yield and minimum costs and therefore maximum use of antibiotics. With multi-resistant bacteria as an effect. There is massive and global towing of live and dead animals, with Dutch companies playing a leading role, as the British newspaper “The Guardian” recently showed.

Torah shows our transgressions
In the book of Leviticus 11 we read which animals are allowed as food for humans. There are specifically mentioned all kinds of animals, including the bat that is not suitable for consumption. Verse 13 “You shall abhor these among the birds (they must not be eaten, they are an abomination): the eagle, the vulture and the sea eagle … verse: 19 and the stork, all kinds of herons, the hops and the bat.”

Sacrifices
China is a superpower in world trade, benefiting the Western world. Messiah Yeshua urges us to keep oil in our spiritual lights and to be awake. To stand up for the weak and the oppressed. Yeshua says in John 8:12 “I am the light of the world; he who follows me will never walk in darkness, but he will have the light of life. ” It is this light that can bring order and hope to this world. It is a serious, but also a special time when many people take care of others and even sacrifice their lives, like that retired firefighter in America, who went to help in New York and now died of the corona virus at the age of 66. He gave his life for people he didn’t know. Heroism in this diffucult time! Thanks to people like these and all our health workers! It shows us the Face of our Messiah!