A strong woman in the Israeli government

Posted on 23 September 2022 by Elze Erwteman 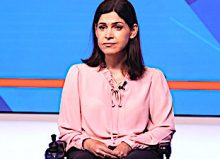 Because Russia is a very rich country because of its oil and gas in the soil it can manipulate and bend the world when ruled by the wrong people. The Kremlin is a power that manipulates the entire people. A power that manipulates its people and subjects them to the system maintained by criminal people. Putin has blown himself up into a dictator and he manages to ignore the rights of a modern people who wants freedom.

He imagines himself to be an Emperor with an empire like Russia once was when the Western nations colonized and subjugated the world and Russia expanded its territory through wars. The people were used and abused and that happens again in modern times. With this thinking and acting from the Russian past, Putin is now acting towards Ukraine. This comes at the cost of thousands of victims who are brutally murdered or deprived of their safety in the form of a roof over their heads, deprived of food and forced to flee for their lives. The world stands there and watches. What a tragedy!

Because energy sources such as gas now play such an important role in the world and the war in Ukraine and these events evoke emotions of fear, the article in The Jerusalem Report, July 25, 2022, is an encouragement. In this time of increasing chaos and fear, for those who put their trust in the Eternal, it is a wink from heaven showing us that He cares for Israel. The article, written by Neville Teller, writes about the discovery of gas deposits off the coast of Israel over the past twenty years.

In 2004, the Tamar natural gas field was discovered off the coast of Ashdod, and in 2013 Israel started to supply its own gas. Then in 2010, the gas field that is in the coastal waters of Israel, was found and it was given the name Leviathan. Russia, which provides 40% of Europe’s necessary gas, is now threatening to close the gas supply to Europe because of the war with Ukraine and this threatens the economy of the European countries. Israel’s gas fields now seem like a special gift from above.

On June 15, Karine Elharrar, Israel’s energy minister, along with EU and Egyptian ministers, signed a landmark document in which Israel will export gas to Europe for the first time, for three years with an option to extend this contract for another two years. Ursula von der Leyen, President of the EU, was present at the signing of these documents. In this way, Europe is not dependent on Russian gas. Transport of the gas is still a problem and has yet to be solved. Pray for these situations and for the people of Ukraine in need.

Karine Elharrar is mother of two children. She is a lawyer and after a career in the Knesset is now Minister of Infrastructure, Energy and Water. She suffers from muscular dystrophy and is in a wheelchair. Karine: an Eshet Chayil in the Knesset!