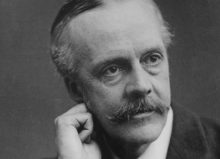 The Balfour Declaration changed the course of modern Jewish history in 1917. It was the beginning of a new chapter. This is what the famous rabbi Jonathan Sacks writes in the Jerusalem Report of Nov. 13, 2017. One hundred years ago!

Never had the Jewish people ceased to dream of returning to the land of their ancestors, Shivat Tzion. Because of the book of the British novelist George Elliot “Daniel Deronda” in 1876, it were Christians that felt that soon a new time would arrive and that the Jewish People would return to Zion. Twenty years later there was the first Zionist conference and this changed the dream into a political program. This led to the return actually taking place. Theodor Herzl brought about this revolution. The Balfour Declaration made this change possible. It was a courageous, historical transformative action.

What was so unique about the Balfour Declaration? Rabbi Sacks gives three points:

There is a war going on from the PLO, which uses the Internet to achieve its goals. It has now led to 13,637 Britons signing a petition calling for “apologizing to the Palestinians for signing the Balfour Declaration in 1917. This internetprocess was stopped in June 2017 by the proclamation of elections in England by P.M. Theresa May.

This struggle, however, started in 1964 when the PLO included in its charter the following text: “The Balfour Declaration and the Mandate for Palestine and everything based on these texts is of zero and no value. Historical or religious claims of the Jews towards Palestine cannot be reconciled with the facts of history and the true sense of what a State must be. Judaism, a religion, is not an independent nationality. Nor do the Jews have the right to a State of itself; they are inhabitants of the countries where they live.”

Abbas was the man behind Yasser Arafat and to this day Fatah and the PLO fully honor this text in their fight against Israel and do not tolerate Israel in the midst of 22 Arab States and 56 Muslim countries. The Millennials,  (youth born from 2000) often receive their news from friends and tweets. It is easy to influence them with a tweet such as: “Why did England give away Palestinian land to European Jews?” This distortion of history can easily metastasize, and this signing action has recently been achieved. Let us use the above knowledge in our social circles that we are part of to point people to the distortions of truth.

In Zechariah 14: 3-4 it is written about the final battle: “Then the Lord shall go out to fight against those nations, as He formerly fought in the day of battle; his feet shall stand in that day on the Mount of Olives, which is before Jerusalem on the east side; then the Mount of Olives will split in the middle, … ” Our choice for Israel and Jerusalem is good and wise. How old or young we are, we can do something. Esther and Mordechai also did not keep quiet. Happy Purim!