Forces of nature and eternal light 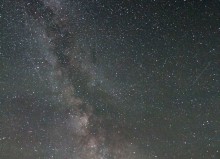 In the middle of the Negev Desert in Israel, lies the small town of Mitspe Ramon. At an altitude of 850 meters, I ‘m at the edge of a cliff 500 meters deep and tremble. The forces of nature have carved out a crater with length of 40 km and about 10 km wide. I look through a telescope to see the sunrise of the moon. My husband and I enjoy the stars that shine in the cosmos. the galaxy proves G-d’s creativity and stunning light in the universe shows its descent from The Light. It is an impressive sight. And when the moon rises the countryside is shining on the outskirts of this impressive ‘ mortar ‘ (machtesh in Hebrew ) in the light.

The stars fade from the much brighter light of the moon. The moon is a little less than full, but gives enough light so that everything is visible in our environment. Through the telescope we can see the craters on the moon, also the plains and shadows. Those of you who are older, remember the first men on the moon. An impressive reminder! Mitspe Ramon has an information centre where we can remember the Israeli astronaut Ilan Ramon. Ilan Ramon was killed in 2003, along with the entire crew of the spaceship Challenger. The cause was a technical error in the attachment of the heat shield of the spacecraft. All seven crew members, including two women, were killed on their return to Earth.

The moon rises in the religious ideas of many nations are often receiving a bigger place than the rising of the sun. The sun always shows the same face, the moon has its phases, she disappears and returns, is ” born ” and ” dies. ” Our ancestors did not have a clock or calendar. The peoples attributed power to the celestial bodies in the cosmos, which greatly influenced their lives. Think of tides and certain radiation. But the divine power that people ascribe to the celestial bodies is not justified. In the ancient times the Moon was associated with water and rain, fertility of humans and animals, with menstruation, with vegetation, with life after death and initiation rituals. In all these cases the same rhythm was felt, the life of the moon, which always repeats itself and renews.

There is no greater contrast than that between the Egyptian empire, ruled by the Ramesside dynasty of the nineteenth B.C., where the Hebrews lived in slavery. A small Semitic people that placed themselves under the exclusive care of the Hebrew Elohim. At once they broke free from the oppression of the empire of the Egyptians, that believed in a multitude of gods and had a social inequality. Only after the break with all the habits of polytheism and slavery did Israel hear the sound of the Shofar with the giving of the Ten Commandments on Mount Sinai. Adonai makes himself known as Saviour and Deliverer, for He has delivered us from Egypt. He is known as Saviour and He gives us rules.

Genesis and the first eleven chapters of Exodus forms the introduction to the history of the foundation of a nation under the rule of the Torah and Adonai. We find many texts in the Bible about the sun and the moon.
In the blessing of Jacob which he gives to his sons, and in that case to Joseph ( Deuteronomy 33:14 ), the text that Joseph will enjoy the products of the earth that will be produced with the help of the sun and moon.

“Blow the trumpet at the new moon, at the full moon, on our feast day. Because it is a statute for Israel, an ordinance of the G-d of Jacob. He established it for a testimony in Joseph, when he went throughout the land of Egypt.” Psalm 81: 3-5

When Messiah will return the shofar will sound. “For the Lord himself will descend from heaven with a shout, with the voice a of the archangel, and with the trumpet of G’d, and the dead in Messiah Yeshua shall rise first.” 1 Thessalonians 4:16.
There is hope and a future for those who believe.
Finally there will be peace!