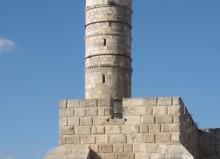 In the year 700 BC the Assyrians tried to conquer Jerusalem. But the Lord said: “Therefore thus says the LORD of the king of Assyria: He shall not come into this city; he will shoot no arrow in it, no shield against lifting and no bank against it. Along the way he has come, he will return, but in this city he shall not come, says the Lord. And I will defend this city to save it for my sake and the sake of my servant David ( 2 Kings 19:32-34). At this time this text is found in “The Tower of David Museum” in the exhibition: a medical diagnosis. During that time King Hezekiah was king of Judah.  One by one, all the cities of Judah came into the hands of the enemy, and now it was the turn of Jerusalem. At that time Jerusalem was one of the holiest cities in the world and it was coveted because of that reason.

A miracle of the Lord has saved her from the greedy Assyrians and   the word above in 2Kings came through the mouth of the prophet Isaiah. It was at that moment that the Lord did a miracle for Jerusalem.  How the miracle has happened is not known till today, but one thinks of a plague that broke out among the soldiers of the enemy army for in one night thousands of soldiers of the Assyrians died.  Many researchers have tried to find out which plague the salvation brought to Jerusalem, but to this day they do not know. In this exhibition, we also see a lot of herbs that have been used for the treatment of diseases. Jerusalem was also known for its remedy against snake and scorpion bites, spider bites, eating poisonous plants, etc.

This means that thousands of people’s lives were saved because of this medicine. This medicine was made of herbs and spices from around Jerusalem and the Dead Sea, poison from venomous animals and plants, minerals and asphalt and wild carrot. Frankincense was used on the altar of incense, but also contains anti-inflammatory substances that will heal. Cinnamon has also occurred in the anointing oil for the Temple. Cinnamon was not found in the Middle East and the scholars do not know where the cinnamon came from for this sacred formula.

Cinnamon brings LDL cholesterol down. It also brings the glucose level in the blood downward, such as insulin that is used as a medication for diabetes. The use of cinnamon can prevent diabetes in a mild way, but we should watch our intake of refined sugar always. Especially when we have diabetes in the family. In nature we find so many plants and oils that are important to our body. In the Bible we find knowledge about plants and the priests had a lot of knowledge about the medicinal effects. The Eternal is our physician, the knowledge of healing used for our benefit. Psalm 30:2, “O Lord my God, I called to you for help and you healed me.”