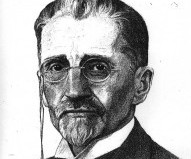 Eliezer Ben Yehudah is the father of the modern Hebrew language. He was an inspired man. As a young man he received a vision to develop the Hebrew language in order that the Jewish people could form a nation that would speak one language. His vision became reality. Only Eliezer never was able to see the State of Israel becoming a state. He died in 1922 and Israel became a State in 1948.

Eliezer (see picture) made a dictionary that he completed after the First World War. It was an unusual dictionary. Every word was the result of research and study. Eliezer studied books in large libraries in the large cities like Paris, London, New York, Berlin. His dictionaries gave the origin of the word and also modern words were given after much research.  For instance the word for bicycle is: ‘ophanajiem’ and it means: two wheels.

Eliezer fought for the fact that he wanted the Hebrew language spoken in the Jewish schools. The land was under the leadership of the Turkish and later the British and was called Palestine. There was a real language fight going on because the Orthodox Jewish people did not want to speak Hebrew. They just wanted to use the Hebrew language in the Synagogues and in the Torah studies.

These contradictions were the cause of heavy struggles, but in 1920 was the Hebrew language so developed that in the Jewish schools Hebrew was spoken. When the State of Israel was founded in 1948 Hebrew was the national language of the new nation.

When you visit Israel in our days you hear a beautiful Hebrew spoken by all the people and it is music in the ears. Thanks to men like Eliezer Ben Yehudah. All cities have names streets after Eliezer. The street in Jerusalem named after him is one of the most famous in the city.