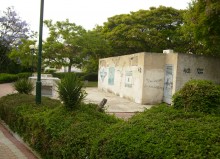 Recently my husband and I were in Jerusalem.

We were there when rockets were fired by Hamas and were shocked when the war siren sounded. We had the privilege of a mamad ‘(hidden room) in our apartment and could go there to hide. Fortunately, the missiles aimed at residential areas missed and came down in fields. We were also in Tel Aviv when the sirens sounded and the protection of the “Iron Dome” was evident when a rocket was fired from the air aimed at Tel Aviv to do harm. We heard a loud bang and then the danger was averted at that time by the protection of the “Iron Dome.”

The world is not troubled about all these attacks on Israel, although there is still a limited support of loyal countries.

When you’re in Israel you realize again the difficult situation in which Israel is. Especially in relation to her safety and protection. A country so young that had to fight so many wars must continue to develop ways to protect herself from destruction and Israël has a well developed and trained army.

For example, in the last Lebanon War in 2006, a form of guerrilla war was being aimed at Israël. Israel has learned as the authors write in the Jerusalem Post. Due to the unstable situation in the region in recent months intensive training of the IDF troops from the West Bank and the Jordan Valley has happened. These military units can be sent quickly to possible war fronts.

Israel’s military have looked and look at new threats that arise. On the Lebanese border, Hezbollah is building rocket-launching sites with advanced technology with control and command centers. The ground troops will be needed to disable and destroy  such centers if in the future confrontations arise. In Syria and the Sinai al-Qaeda-inspired groups are developing like mushrooms.

Gaza’s Hamas goes together with Islamic Jihad groups and Palestinian jihad organizations are building heavily armed Islamic bases  and prepare for a long struggle with Israel. Since 2001, Hamas has fired 12,000 rockets in the south. In the beginning of this article, we have written our recent experiences with this bad situation. Hamas believes that Israel has no right to exist and wants to destroy Israel.

Many in Israël are in need of prayers against discouragement on the heels of the recent Gaza Strip crisis and the desheartening desplay of lack of support in the UN. Although the sweeping approval of the UN General Assembly members to recognize Palestine as an observer state means nothing in terms of actual Palestinian statehood, it is still a slap in the face by the majority of nations tot the people of Israël – one of many.

We believe that the Guardian of Israel neither slumbers nor sleep. Therefore there is more protection in Israel with all these rocket attacks. Still it is very terrible to live in such a threatening situation and many people are traumatized and hurt for many years.

This is our hope: Messiah Yeshua himself is fighting for Israel!

In this time of Hanukkah we remember the struggle of the Maccabees against the powers that wanted to destroy Israël. Also in this time Israël is fighting for her existance and has to take up his weapons, unfortunately!