The keys to the Zion Gate

Posted on 18 September 2019 by Elze Erwteman 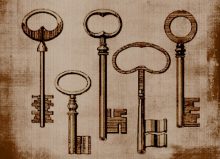 Ben Gurion was the Prime Minister of Israel. An incredible man who founded the State of Israel while facing the most impossible decisions. Just think of the fact that the English, who had the power and goverment until the establishment of the State of Israel, worked against it in many ways, with some exceptions.

Puah Shteiner, a resident of Jerusalem in 1947 writes in “My Jerusalem Forever”: “The days before the founding of the State when the British were still there were dangerous in many ways. In those days the Arabs did everything they could to do attacks on Jews and the British looked the other way. We were constantly subjected to many humiliations and tribulations and we could not protest against this. We were not allowed to dance on Simchat Torah and we were never allowed to blow the Shofar.”

We know that later the city was almost starving and after the State of Israel was establishment, the old City came into the hands of the Jordanian army and the entire Jewish part of the old city was destroyed. After nineteen years, in 1967, after a fierce battle in the Six Day War, Jerusalem returned to Israel after 2000 years and the key to the Zion Gate was handed over to the Jewish people. We still know the images of incredible joy of the people when this happened and we still hear the sound of the Shofar sounding at the Kotel.

Ben Gurion was a man who was not considered a religious person in those days, but he had the Bible on his desk and consulted it regularly, especially the book of Isaiah with the Prophetic texts. He made it possible for Israel to get its own State because of its perseverance and unorthodox decisions.

A follower of Messiah Yeshua must be just as radical. We don’t know if Ben Gurion knew Messiah Yeshua, but he was radical and made radical decisions. In 1958, Ben Gurion voted for a law that stated that any person who honestly declares that he or she is a Jew will be registered as a Jew. This led to a crisis in the government. The religious parties made it: a Jew who declares that he is a Jew and is not a member of another religion is a Jew. This has been a problem for sixty years to this day and has affected Jewish believers in Messiah Yeshua. If only they had accepted the advice of radical Ben Gurion!