Posted on 08 September 2015 by Elze Erwteman 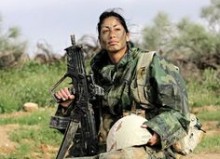 Women in the army of Israel
By Elze Erwteman

Women who fight in wars is a difficult thing for many people. In Israel’s history women have often played an important role in wars. In Joshua 21:43 we read:”Thus the Lord gave unto Israel all the land which he swore to give unto their fathers; they possessed it, and dwelt therein. ”
From that moment Israel dwelt in the land, it was no longer a nation of nomads. They went to cultivate the fields, grow crops. The woods were used for wood. They built for themselves huts to live in. In Beth Shemesh and Bethel men found remnants of simple houses and utensils of the people of Israel. These simple homes are built on the remains of the cities of Canaan, who were conquered by Israel. These cities were rich with palaces and houses of important leaders. The cities were walled with thick walls. Slaves were needed to build these forts. Israel hated slavery and began to live in a simple way. They regarded themselves as free people and independent farmers. The archeological remains that are found are sometimes repaired walls of Canaanite cities that Israel used to repair in a light way. The command to do is to dwell in booths during the Feast of Tabernacles with the simple huts in which Israel initially lived in the country.

At that time, around 1000 BCE, there was a woman, Deborah, who played an important role in the struggle for the defense of the country Israel, she was a woman who instigated the fight when Israel was discouraged. At that time the valleys were still in the hands of the Canaanites. They had iron chariots and were very strong. They oppressed the Israelites by using them as footmen, especially from the tribe of Issachar. Gen. 49:14-15.
It was Deborah who encouraged them to no longer allow this to happen. Barak of the tribe of Issachar, became the leader in this fight. Barak asked Deborah if she would go with him in this fight. Her answer is Richt.4: 9 “I’ll go with you, but you will not glory on the journey that you take, since Adonai will give Sisera into the power of a woman.” Sisera was the commander of the Canaanites.
When Israel began to win the battle, Sisera fled to the tent of Jael, wife of Heber the Kenite. She gave him a blanket as a covering and milk to drink. When he was fast asleep Jael took a tent peg, grabbed the hammer, and went softly to him and drove the peg into his temple till he died. Richt.4: 21-22.
In the song of Deborah in Richt.5: 31 is written: “So will perish all thine enemies, O Lord! But those who love Him be like the ascending sun in its strength. ”

Now, 3000 years later, there is the State of Israel and always the struggle for her survival. After 1948 there has been a strong army that proved necessary. Before1948 there were many people against an army, but once Israel was declared a State, war broke out immediately and it has been that way since: a continually struggle where we need a strong army.
From Jerusalem Report July 22, 2015, from “Women of the IDF”: Ben Gurion founded the first women’s corps in the IDF in the State Foundation during the war of independence. Since this time women can fulfill almost all positions in the army, which men can. Major Liz Tzrorchen is a consultant for all matters relating to men and women’s issues in the military. She advises the Chief of Staff of the Army. She is religious and says that many still have difficulty with the fact that women come in enemy territory. Even though women have served in the last Lebanon war and the recent war in Gaza. Young Maya Tiben is with her twin brother in a heavy combat unit. She says, despite the fact that women are increasingly integrating into the army commanders often have great difficulty. Maya thinks that women in some ways are stronger than men in the missions, but it is still difficult for men to accept us. She says, “I have the honor to defend our country.”
Maya and many other women are together with the men of the IDF and are committed to the defense of the State of Israel. ”
Deborah prophesied that all Israel’s enemies will perish and that those who love the Lord will renew their strength and will be as the rising sun. Men and women will be together.