Women in the army of Israel 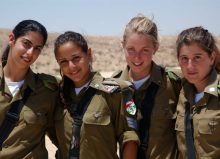 Women in the Army of Israel

When you walk in the northern neighborhood of Jerusalem, Pizgat Ze’ev, you can see an Arab village named: Hizme. The Arab village is about 5 km from Ramallah, the Capital of the Palestinian Authority. (PA). It is located about 7 km from the old town of Jerusalem. Since the Six Day War is Hizme occupied by Israel. There is a checkpoint at the western end of Hizme built after many suicide attacks occurred by terrorists from this city. Hizme now has 8,000 inhabitants. 22% of them working in Israel. Hizme is known for its olives and grain that is growing in the fields surrounding the village.

Due to the tense situation between Israel and the Palestinian territories there is much concern for the safety of Israel. Terrorists can easily come from these places to enter Israel and Jerusalem, and do harm to the population. The army and police have their hands full with the task of protecting the population.

The Masada Company is a company of soldiers consisting of women 30%. Just a few years ago this was impossible, but now it is a reality. The base of the Masada Company is located in Camp Anatot which is located near the town of Ma’aleh Adumim. Together with female soldiers of the Company Paul Asher drove in a convoy of two armored cars. Paul Asher is the author of an article in the “Jerusalem Report”, a journal of the Jerusalem Post that the information gives about this company and their role in the security of Jerusalem.

Driving with these women in armored army vehicles made Asher change his mind about the image of the American Jewish Princess. The convoy stopped at one of the main crossroads in Hizme, a place that has been a location in recent years of violence with the throwing of stones, throwing firebombs at people and vehicles passing on to the Motorway number 60 which runs from north to south Jerusalem. Ma’or Lagali lieutenant, commander of the Masada Company explains that it is a challenge to ensure daily security in this area.

The people in Hizme looked sometimes hardly up from their work, while others put their cars on the side so we could pass. Because the soldiers here are seen daily, they have to be careful for they are seen as occupiers and they are risking their lives. We passed a business with gas containers and tires. This is dangerous for it has happened that burning tires were rolled towards the soldiers.

Terrorists are very creative in hiding dangerous explosives in the most unexpected places. They put explosives in watermelons in CD cases in a CD store. In the base of a birdcage hanging outside a pet shop, even explosives hidden in a loaf.

These are the dangers to which the women of this Masada Company are exposed daily throughout the region where the Israeli-Arab conflict plays a role. The 21-year-old Lt. Sharon Bronar of Beit Zayit, the officer in charge of a platoon of 18 young male and female soldiers who regular go into the field for a period of 12 hours due to their military duties and often in bitter cold, scorching heat and sometimes even from house to house searching for weapons, Sharon says that her father was always worried terribly for her and the soldiers.

The task of the platoon is to ensure that law and order are maintained and to ensure the safety of the people who live there: Jews and Palestinians. The presence of female soldiers was initially difficult for some male soldiers to accept, but soon got everyone to respect each other and the situation was normal.

They saw everyone as equal: men and women. The men from a strong male-oriented background were soon experienced and all these bias disappeared quickly. Especially in an environment, Jewish or Palestinian, with this guy attitude one just relaxes faster when female soldiers act and women check women for weapons.

Because of the fact that the body of a woman gets injured more easily because of the intensive training than the body of men, women do this army work often at the expense of their body. The women give a lot and show great dedication and self-sacrifice. We are grateful for these young women that they make Israel every day a safer place!