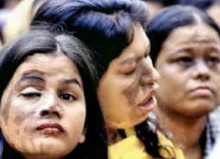 Our role
Women are talented in many ways. In order to carry out His work on earth with Him G-d equipped us with specials talents. The opponent has known this for a long time and so he tries everything to humiliate women and to break down their strength. Whether he will be successful is up to you and me in our role as operators in the plan of G-d, where it is important to be informed and take position.

In short
Acid crime is a form of violence against women of which we are reporting on our website. It is far the most visible one, and yet so invisible from the lack of true numbers. Acid attack violence is ‘a sadistic and cruel form of violence that involves the intentional throwing of corrosive acid onto another person with the intention of disfiguration, according to Jane Welsh in her ‘Comparative Exploration Of Acid Attack Violence (2009). Acid is thrown in the face and burns into skin and eyes. Women are attacked while sleeping or in an unobserved moment at home or on the street. Acid is easily available because it is used in the cotton production.

Motive
According to Welsh: ‘Attacks are predominantly perpetrated by men as a result of shame and loss of face or loss of honor’. For example: when a woman refuses to marry a man, in case of a jealous husband or as a demonstration of authority, as we see in Saving Face Documentary (2012). Women are maimed so severely that they are of no more value. Rejected by the society in every way, their chances are zero. And the psychological impact of is enormous.

Is this an Asiatic satire?
‘Acid attacks are a worldwide phenomenon, that are not restricted to a particular race, religion or geographical location’, says Acid Survivors Trust International (ASTI) on her website. ‘They occur in many countries in South-East Asia, Sub-Saharan Africa, the West Indies and the Middle East, and there is anecdotal evidence of attacks in other regions’.

Murder
‘Acid attacks rarely kill but cause severe physical, psychological and social scarring, and victims are often left with no legal recourse, limited access to medical or psychological assistance, and without the means to support themselves’ says ASTI. But some women don’t survive. Physical pressure and pain brings them to suicide, so witnesses the Dutch example of 2011 in the city of Zoetermeer, the Netherlands. A woman took her life 2 years after the attack. Her ex-boyfriend, inspired by the acid attack on Katie Piper (2008), received a sentence of 16 years in jail, detention in hospital and involuntary treatment was demanded against him. He did not regret, except for himself. Court judged that the woman had been killed socially.

No longer blameless
Combating acid violence is a great challenge, as many attacks go unreported and undocumented, it is difficult to discover the true number per country or community. Men deny their involvement. Hard-hearted. They say women did this to themselves, that is was an accident. They benefit from the fact that it’s hard to prove this, because it takes place within their families. Even with help of their relatives. Women subject to this crime live in the house of their husbands families and are too afraid to speak for their rights, witnesses 2012’s Saving Face Documentary. If they speak about this crime they often are bannen from their families. These women are very courages and deserve our respect.

New law in Pakistan
The Acid Control and Acid Crime Prevention Bill 2010, introduced by MNA Marvi Mamon (a woman) in Pakistan is a great step forward! This law recommends ‘14-year to lifetime imprisonment sentences and levies fines up to Rs1 million for the perpetrators of the crime’ (Tribune.com December 12, 2011). Acid Survivors Foundation (ASF) Bangladesh and related organizations help and support women to fight for their rights and recover their self-confidence and try to document crimes in order to convince government of the gravity of this crime. The women who are the victims of this crime and when they speak against this crime are often rejected by their families. These women are very courageous.

Awareness
It is good to be aware of any form of oppresion of women. What we can do is fighting against any inclination inside ourselves or in our surroundings that under-appreciates women. We have to stand up and show our strength. A woman of valor, who will find her? We should show our strenght in our surroundings. Modestly, but strong. By the work of Messiah Yeshua we can truly recover from our injuries. And Torah shows us how to develop our characters. The purpose is: being powerful and useful in His Kingdom.