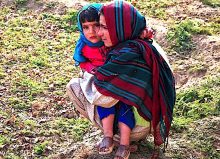 See the reason for posting these kinds of topics at the bottom of this article.

Female circumcision
According to the World Health Organization: WHO and UNICEF, 3 million girls are still at risk of genital mutilation every year. It occurs in 28 African countries in the Near East and in Asia. In countries such as Somalia, Djibouti and North Sudan, the most drastic form of infibulation is often used. Female and female circumcision is also known as Female Genital Mutilation. The seriousness of the mutilation depends on the wishes of the parents or the circumciser, a profession with great prestige in these areas. Often this position is passed on from mother to daughter. Worldwide this form of mutilation is considered a violation of women and children’s rights.

COVID-19
Plan International and partner NAFIS network, notice an increase in reports of female circumcision in Somalia. “The lockdown and closure of schools because of Covid-19 encourage forced circumcisions. Circumcisers now go door-to-door and in order not to miss out on income, these professional circumcisers are more diligent than before. The result is the highest number of female circumcisions in the past eighteen months,” said Sadia Allin of Plan International Somalia.

What does Plan International do?
This organisation is committed to the health and rights of girls and women like never before. She speaks out on radio and against policy officers and educators. To make people aware of the serious consequences of female circumcision on the health of the girl, for the rest of her life. They also train these people in schools and in government services to make them aware of the seriousness of this mutilating operation. Right now, during the corona crises, they make girls and mothers aware that girls should be able to be in possession of their own body. Plan International is also working on providing information to the women who practice the genital mutilation and do this as a way of living, to help them to find other work and to stop this cruel tradition.

Child Brides
Seen in that light, the marriage of little girls, sometimes aged eight and nine, is a different phenomenon, which deserves our attention. In the Netherlands, too, we are increasingly dealing with imported brides. Girls married off against their will to often much older men. In our country, a law has been urgently passed by the parliament and the first chamber. This law can invalidate such a marriage, if the girl is under 18 years old, as soon as one enters our country. It’s not going to help, because the rest of the world recognizes these kinds of marriages. There is a clash of different legal systems. Similar legislation would then have to be introduced throughout Europe. Younger child brides are excluded from the law and are left totally alone without any help. Many of them are abandoned by husbands who give up. Or have died in the many conflicts and wars in these areas. The child bride, often still a child herself, is left helpless, with one or two children. With barely a roof over their head and without help from family. The quickly passed law in the Netherlands does not have a fair solution for these very young child brides.

Websites
Laura Sreif of Women’s Center Lebanon is one of the initiators who stands up for these women. And organisations such as Plan International Netherlands and others are doing what they can to curb this injustice. They are fighting a battle that is far from over. See the following Dutch websites: www.planinternational.nl and www.terredeshommes.nlEnglish language website: https://plan-international.org/case-studies/7-ways-to-end-fgm/ It is important to pray for this situation. That more people will understand the danger and do not want this unhealthy, cruel tradition for their girls any longer.

Why human rights are mentioned on our website
by Elze Erwteman

Great is our responsibility for these children in this world! In this case these young girls! In any case we want to bring this to your attention as a point for prayer and concern and to have part in the action to stop this wrong tradition. The reason for choosing a Human Rights section on our website comes from the realisation that the document of Human Rights, which were drawn up in 1948 by the then young organisation of the United Nations, are an important instrument to change things in the world that are important at world level and are unjust and harmful. This makes it possible to protest injustice and initiate lawsuits when necessary.

The Universal Human Rights are grounded in the Torah, the sacred revelation Moses received on Mount Sinai after the Exodus from Egypt, the liberation of the people from the yoke of Pharaoh, and the system of Egypt, a system of oppression. The article below by Cisca Mudde is a follow-up to an earlier article about female circumcision. This is in fact mutilation of the female body that cannot be undone. A horrible tradition that damages the woman for her life. These young women are still children, girls. All kinds of organisations are trying to stop this wrong tradition by using the right to protest. Messiah Yeshua says in Matthew 19:13, “Leave the children alone, do not hinder them from coming to Me. For the kingdom of heaven belongs to those who are like them.”