Marriage and birth of a girl in India 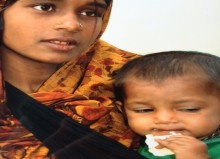 Marriage and birth of a girl in India

Nellie:
The two partners have hardly seen each other in case of arranged marriages. They do not know each other and the relationship is often wrong. One of the ways in which the men can get rid of their wives is by burning them on purpose. In that case the man tells the woman to make him tea. He has opened the gas tap ahead of time so when the women lights a match there is a gas explosion and the woman can be burned very seriously. Nellie and her husband have seen a room full of women with very severe burns. These women have no rights. In the high -caste women marry men of the same caste (Brahmans). These people do not lack anything. The low caste is often illiterate without education.

Baby girls are a burden

Nellie:
When women from the lowest caste in India are pregnant and they bring a girl in the world it is a cause for sadness. A girl takes a dowry, and that is from birth a terrible thing because there is no money. Often the man then says: you or the girl has to go. Many times the baby-girl is killed. Nellie did not say how the girl is killed because it is so terrible. The dowry is such a strain on the family that the father chooses for murder.

If the girl can stay alive and there is no money for a dowry, the mother often chooses to grant the money of the dowry. She often does this by donating an organ: for example a kidney or a lung. For this she gets a lot of money, but for the Westerner it is not much money. Often, it happens that the wound becomes infected after the operation. The mother then becomes disabled for the rest of her life.

Nellie and her husband Wim have more than 20 years ago, an organization established to provide funds for the poorest people in India. There are schools that these children receive education and hopefully are able to break out of this cycle of poverty and exploitation. Their website is: www.goodnewsfriend.nl

WOV: June 5th 2014, the newspapers brought the terrible news about two teenage girls of the lowest caste that were raped and murdered by hanging. In the evening they went outside to relieve themselves and because they do not have toilets they go outside. Often men kidnap these girls and do with them as they want. In this case rape and murder. Girls of this lowest caste have no rights.