The courage of the daughters of Tslofchad 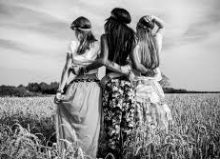 Exalted position
This compelling and, above all, compelling event surrounding the daughters of Tslofchad in Numbers 27: 1-11, has gone down in history as the action of five women who have had the courage to approach the leadership of Israel at the time because of a tacit legacy. The Torah was supplemented by their action, the spiritual document that Moses received from heaven! Take a moment back in time. There was a patriarchal male society, where the woman actually had no say or could derive any right from anything other than that decided on her by the man. And to think that by giving Torah G-d gives the woman so much more elevated position than the surrounding countries, where the woman had less value than a pig, in many cases.

Patronizing treatments
That does not alter the fact that the woman was “just forgotten” in the newly received Torah, regarding her right to her right to inheritance. Could it have been “forgotten” by the Eternal, or had Moses overlooked it? We don’t really know. In any case, a unique situation arose here. This renewal guaranteed the name of a family and of a family, without sons in Israel. What exactly happened here? Remember that the woman had not really participated since Eve. The condescending treatments by the men at her address, have left traces that, to this day, have left profound effects in the soul of the woman There was now a Torah for the rights of Israel, it would get better for the people, but not yet for the woman in this vital area.

Amendment to the Torah
These women of guts, each an eshet chayil, strong woman, as mentioned and praised in Proverbs 31 verse 10, honored their femininity with this undertaking. Was it an inspiration from G-d himself, combined with their guts and sense of justice? They were smart and practical, guarding biblical duty by keeping the name of their gender. Moses saw his blind spot brought to his attention by the women. As a true leader, he was able to listen, consult G-d and fill the ante where he had failed. He brought the lawsuit of the women before the Eternal, and the Eternal approved the women. The Torah was amended with an amendment that established the law of inheritance forever in the Constitution of the Eternal and of Israel as a people.

Recovery
The forgotten womens’ rights came to the attention in this unique and also humorous way. And to this day, the weekly Torah reading of Pinchas is read again and again in the parshah. “From the weak position that women had and still have, strlong women make themselves heard,” quote from Lion Erwteman, rabbi of the Jewish Messianic congregation Beth Yeshua in Amsterdam, deliverd on the Shabbat of June 11, 2020. Not only was this straightened what was crooked in the Torah, but the woman was put back to their place by G-d by these daughters with guts. Part of the restoration of rejection, read at Genesis 3:16.

Curse
That is a text that has become a curse to women through the ages. Eagerly seized by the lust for men, this so twisted interpretation in Genesis 3 “and your husband will lust and the man will rule over you.” Quite a stripped-down version of the original dedication to the woman, “and your desire will go to G-d.” Suddenly she was no longer the ezer kenegdo (Genesis 2:18), the mate equivalent to him, but moved to a subordinate position. One could explain the Bible in this way if so desired! The man has also been inadequate for centuries because of all this, because of the lack of balanced and wise insights of the woman.

Jewish Messiah stripped
We live in a time of increasing recovery and not only of women. But also from the Name of the Jewish Messiah, called Yeshua, “what’s in a name!” Make no mistake, it makes a world of difference. A name is extremely important. The history of Yeshua in its own Jewish context, over the centuries, could have looked quite different if His Name had not been corrupted and hijacked by “believers” who did not and do not like the real Yeshua, G ‘ d on earth. Then it also becomes difficult to recognize and acknowledge the right G-d in heaven. Everything that was real and Jewish about Him was stripped, what was left of it was another god. A god who would have abolished his own Constitution.

Doing great deeds
In this light there have always been people who interpret the Bible in the most advantageous way for them. It is good that there have been and still are women who stand up and with courage and dare to straighten and straighten, which has been crooked for centuries. They came before the great Moshe and were proved right. We meet as a congregation of Beth Yeshua, women and men, before the G-d of Israel. We, too, have had the courage to go against the current and judge for nearly thirty years, against what has grown crooked for centuries. The Torah, the living Word of G-d, has been returned to the place intended for the Torah, partly because of our efforts. In the Name of Yeshua, the Messiah. The coming King of kings Forever! In Psalm 18:30 you read: “With our G-d we jump over a wall.” Through Him we will do great deeds, both men and women, with the guts of the daughters of Tslofchad.