Posted on 25 November 2013 by Jacoba Spijker-Kort 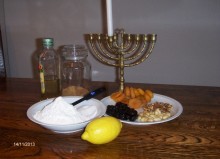 In the first place Hanukah remembers me at the battle of a small army under Judas Maccabeus against a mighty Syrian/Greek army to get back their religious freedom. This story is written in Flavius Josephus’ “Old History of the Jews” pages 824-830. And in the Talmud: Shabbat 21 B. Through intervention from HaShem it happened that this small army won the victory. Also He made it that – after the Temple was cleaned and inaugurated – the amount of oil for only one day burning the Menorah, was sufficient during eight days.

The in oil baked delicacies are referring us to that miracle. Like “latkes” (fried potato sticks) and Hanukah jam donuts, so called Sufganiot. This is an out of yeast pie baked little ball, filled with jam. The Jewish food culture got influenced by the goodies from the countries wherever they lived during the Galut (Dispersion). On the other hand our ancestors brought their own recipes from their families. Depending on which products were available, their recipes got influenced and adapted.

The so called “Flaming Tea” that refers to the Hanukah Light is an old practice among Russian Jews: Take a cube of sugar on a spoon, pour with brandy, light this and drop it in a glass with tea.

The Sefardim like fritters (beignets) dipped in syrup. A delicacy made by my mam at home at the turn of the year. We sprinkled the fritters with powder sugar or sugar with cinnamon. Mostly filled with apple slices. My husbands favourite. That’s why I bake them sometimes for Hanukah.

There is a Judeo-Spanish saying “el buen dia a la tripa” that means for each Hanukah day “a good day for the stomach”. My wish is that you can say this too, after enjoying the Borekas from following recipe.

Boreka is the name of a Jewish little pastry, originally from Greece, Turkey and from the Balkan states. Borekas look like the Spanish and Portuguese Empanadas. They have mostly a hearty filling of dairy or meat, but also with a sweet filling. I chose for the last one. Packages from pie in several shapes, like triangle, square, cigars or little half moons. The dough is made with oil. Those with a dairy filling you can make with butter. The advantage of oil is that they are “parve” so you can use them for all kinds of fillings. Some women are so handy; they can make hundreds of this laborious delicacy in one day.

My recipe for Borekas filled with semi-tropical fruit and nuts.

Ingredients for the dough

I use a basic recipe for pie dough. Makes 20 Borekas.

Pay attention to the order of mixing. May be, there is some more or less flour needed to get a nice smooth and soft dough.

Mix well with a fork in a big bowl the oil with the warm water and salt. Add the sifted flour bit by bit. Keep beating with the fork. Maybe you need some more or less flour. Finally knead with your hands for a little while. The dough has to feel as flexible as an ear lobe. Let the dough rest for a while at room temperature (not in the refrigerator). You can also process immediately.

Ingredients for the filling

Wash this fruit and pour in enough water to cover. Set aside for some hours. Than drain          them. Cut the prunes and apricots in little pieces.

Mix well all this ingredients in a bowl and let it marinate for an hour.

Ingredients for the finishing touch

Divide the dough in 4 pieces. This is easier to handle for rolling out. There is plenty of oil in the dough, so there is no need for flour on your countertop. Even the rolling pin will not stick. Roll out the dough as thin as possible. Cut out circles with a diameter of 4 inches. Scoop on it a tablespoon of filling, fold this together in a half moon package. Press together with your fingers. The trick is to shape a kind of cord along the side, but I am not trained enough. I frequently press carefully with the point of a teaspoon along the edge. Then it looks like a little cord. Put the Borekas on a baking tray covered with baking sheet. Brush the pastries with whipped egg. Sprinkle with caraway or sesame seeds. Bake the Borekas just below the centre of the oven during 25-30 minutes, till golden brown. Warm or cooled down, delicious with tea, coffee or as a snack.