Posted on 08 December 2014 by Jacoba Spijker-Kort 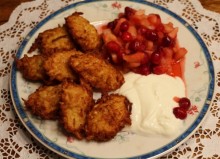 Together with the Candles and the Dreidels – little whirligigs – the latkes belong to the subjects from Hanukkah. This feast remembers us the victory of the Maccabees over the Greek Roman occupation and the rededication of the Temple to our G’d of Israel on the twenty fifth of Kislev. The latkes – Jiddish for little sticks – baked in oil are pointing to the miracle about the Temple Menorah that was filled with oil enough for only one day, but was lighting during eight days.

This latkes are “Parve” that means usable for a meatmeal as well as for a dairy meal. In the last case you can add sour cream or plain yoghourt if you like. Just before Hanukkah fresh Cranberries are available. That’s why this is a good opportunity for such a combination.

First prepair the Compote:
Peel and core the apples. cut into small pieces. Put together with lemon juice, cinnamon stick and sugar in a pan. Slowly heat in about 15 minutes until boiling. Stir so now and than, otherwise it will burn. Then add the cranberries and slowly cook for 5-8 minutes, until the berries burst open and are well done.

Preparation Latkes:
Grate the potatoes. Turn out on to a clean dish towel and wrap, twisting the edges to squeeze out all the liquid. Transfer to a large bowl and mix well with the very fine cut onion, flour (matzo meal or combination of both) baking powder, eggs, sugar, salt and pepper.
Heat about 1 inch / 2,5 cm of oil in a large heavy-bottom skillet. Drop tablespoon-fuls of the potato mixture into the hot oil and cook for 2 minutes, until well browned on the underside and cook for 1-2 minutes on the other side, or until well browned. 5 latkes in a time.
Transfer with a skimmer to kitchen paper towels to drain.
Serve warm. Keep warm during 20 min. in an oven if necessary.
A delicious Hanukkah dish together with the apple-cranberry compote. Combined or not with sour cream or yoghourt.

I wish you a joyful Hanukkah,
Jacoba Spijker-Kort