Herbal medicine and the Bible 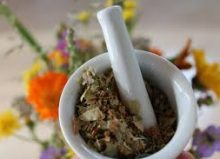 The Bible provides food for body and soul, including herbal knowledge. Already in Genesis G-d speaks about everything that He had created and He saw that it was good. Everything was present in Gan Eden, so to speak, to make people be and remain in a good health. When the time of Noah arrived, the world in all its seams fell into a sad form of decline. It was no longer good. The correct knowledge about creation had seeped away through man’s obstinacy. Throughout the Bible you see time and again that knowledge of the healing power of herbs is passed on.

When Hezekiah, the king of Israel, became sicker and sicker and the court doctors could not do anything, a proposal came from the ranks to treat the king with a spice mix cake. This cake was laid on the king and the healing began. Of course, the Eternal One was also called upon, who promised the king that he would be added for another 15 years. But the herbs were not forgotten. G-d himself inspired the herbal campaign! This precious knowledge has not only been preserved in Israel. Many ancient nations still practice this ancient medicine. Medicine and religion have been closely linked throughout the centuries. There is therefore a lot of magic mixed with the simple herbal knowledge.

Apart from that, this knowledge is still invaluable. “He showed me a river with water that gives life. The river was clear as crystal and originated from the throne of G-d and the Lamb. In the center of the town square and on either side of the river stood a Tree of Life, which gave twelve fruits, each month its own fruit. The leaves of the tree brought healing to the nations. There will be nothing on which there is a curse. The throne of G-d and of the Lamb will stand there in the city. His servants will worship Him and see Him with their own eyes. And His Name is on their foreheads” (Revelation 22).

The angel spoke to John in Revelation: “Do not keep the prophecy of this book secret because time is at hand. He who causes evil and who is unclean will become even more unclean. He who does good will do more good, and whoever is holy will become even more holy.” And: “I declare to anyone who hears the prophecy of this book: if anyone adds it, G-d will give to them the plagues described in the book; and if anyone takes anything from what is written in the book of this prophecy, G-d will take from them their share of the tree of life and of the Holy City, as described in the book.”

The road to the tree of life is closed off. We are thrown out of Gan Eden. An angel guards the entrance to this wonderful place. It says: so that one also will not take from the tree of life and live forever (in their decayed state). We see that it has been decayed in the ages that man has been on earth and has transformed creation into a polluted and lost state. Humans and animals also suffer from the lack of knowledge. The gap is huge, and is in line with the warning of the Eternal to us, who live on His planet called Earth. Because man rejected the Torah given to him, he has been fully involved in the consequences.

Little blessing can be expected from that. We have brought the earth to the brink of destruction. The seas are very polluted with plastic waste, which is not biodegradable. The fish are dying, the water is poisonous for humans and animals. You could argue that people cannot do anything about it, since the road to life is closed. You could say that, but G-d in His grace gave His people the Torah to life. When applied, there is life and progress. When this Torah is abandoned, there is illness and deterioration. Yet there is still a considerable wealth of knowledge of medicinal herbs among the primordial peoples.

It is from lore from distant times and they are often correct. Get rid of wrong applications, of voodoo and magic, and there is a wealth of healing knowledge in your hands. Of course we are also blessed with current medical science and mediation. It has brought many good things. Unfortunately, it should be noted that big pharma is now referring to much of the precious herbal medicine as quackery and even carrying on a pretty fanatic crusade against it. Harmful and unfortunate. The one does not have to exclude the other. However, big pharma has become a commercial affair, with much too much power. Partly because of this, the available knowledge of the Bible that promises life, is partially blocked.

With the Torah, the Eternal One has returned part of the lost knowledge to us, so that we could live healthily and happily. Unfortunately, people know better and do it in their own way. The consequences are disastrous. The health insurance costs rise to the top of the scuppers, partly due to the power of big pharma. Means that are just as good or even less harmful as to side effects, are despised and set aside. Let us look at the warning revealed to John in Chapter 22 of Revelation, and the predicted consequences of this mismanagement are visible all around us. Humanity is eagerly awaiting the day when the road is open again for life-giving trees and herbs. The animals will also find life in abundance in this new world.