Cultivating and taking care of the earth 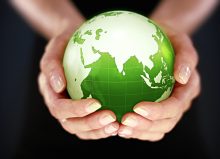 Cultivating and taking care of the earth

Sustainability is becoming a hot topic. It’s practicised in nearly every field you can think of, like construction, technology, agriculture and energy. At the same time there is an increasing demand for produce. The world’s population is still growing, which leads to a higher need for food and products. Often this increasing demand leads to a faster production on a larger scale, but the downside of this is that it exhausts the soil, destroys ecosystems and wipes away nature. This has never been the aim when G’d put us on this earth.

A command for each of us
We’re allowed to cultivate and work the earth, but the Lord warns us to keep it and take care of it at the same time. Cultivating the earth mustn’t have the additional effect of destroying it. To me it’s very special that G’d gave us  this command to all people. Not just to farmers, or woodchoppers, or other people that work with raw materials.

Cultivate and protect
We all have our own responsibility to treat the earth with respect. I find it also very special that G’d made this clear right from the start. Not later, with Moses, but already in Gan Eden. Even in paradise, we were the ones that were given the task to take care of the earth. Also, I like the fact that through this one sentence, G’d makes clear that it’s possible to cultivate and protecting the earth at the same time.

Brushing my teethOf course it isn’t always easy to live by this command. But it doesn’t always have to mean doing large things. To me it mostly means doing what you can do. Often it will be small things, like not letting water run while I’m brushing my teeth. Or separating garbage, or using a lunch box instead of a bag which I would throw away after using it once. Or biking, instead of driving. Putting two dishes in the oven at the same time, instead of one after the other.

Awareness
Even a small thing like keeping hot water in a thermos bottle, instead of boiling it every time you nee d it can make a little change. And then sometimes I’ll be able to do something that has a larger impact, like buying a device that gets energy from solar panels or growing my own food in my backyard. It all starts with yourself. Awareness is the most important thing, everything else will follow.