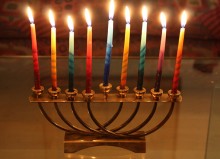 It’s about 900 BCE (before Common Era). In a neighboring country of Israel, Syria, lives Na’aman. He is a general, the boss of a great army. Everyone admires Na’aman, for he continuously wins the war for his people. He has many friends, even the king of Syria is his friend. But he’s got enemies too.

The people of Israel, for example. Na’aman can’t stop teasing and provoking them. For he very much hates this people. Once upon a day his army enters Israel and they kidnap a young Israeli girl. Who is now working in Na’amans house as a maid servant. This is a story of the Bible, written in II Kings 5.

What many people don’t know is that Na’aman is very ill. At night, just before going to bed, when nobody sees him, he takes off his uniform and looks at his arms and legs. They’re completely white. Na’aman has an awful disease.

The Bible calls this disease tsara’at, which is translated ‘leprosy’. You can read about it in Exodus 4,6, Moses’ hand turns leprous. In Leviticus 13,44 there is many leprous people in the camp. And in Numbers 12,10 it is Miriam who is leprous. There is no doctor that can heal Na’aman from this disease.

One day the Israeli girl in the house of Na’aman says: ‘oh, if Mr. Na’aman would only be with the prophet in Samaria, in Israel. He would be able to heal Na’aman’. Can this be true? When Na’aman hears about it, he wants to go there immediately!

So, Na’amans friend the king of Syria, writes a letter to the king of Israel, saying: ‘Na’aman is coming to Israel to be healed!’ Can you imagine such a thing?! When the king of Israel receives the letter he tears his clothes of sorrow. He says: ‘what does he think, this King of Syria! Am I G’d? Can I heal people? This man seeks war!’

Fortunately Elisha the prophet hears about the king’s fear and he sends him a message: ‘send this important general to my house. I am not afraid!’ Na’aman is happy. Now it will happen! He travels to the house of Elisha. But what happens? When Na’aman arrives at Elisha’s house, Elisha sends his servant to Na’aman saying: ‘emerge yourself seven times in the Jordan river. Then you will be healed.’

What?! No more than just that? Na’aman turns very angry. This doesn’t meet his expectations!! He expected Elisha to welcome him warm-heartedly. He expects Elisha to do something special. But this?? It’s too easy to be true. It’s clear: Elisha knows no respect for his rank. So Na’aman says to his servants: ‘let’s go back to Syria. Aren’t our rivers more beautiful? Besides, this Jordan river stinks!’ Na’aman is angry because such a simple solution.

And when he comes up the seventh time… He cannot believe his eyes: his hands, legs, arms, they’re completely healed! His skin has its normal color again. Na’aman leaves the river dancing and he cries out: ‘NOW I KNOW THAT THERE IS NO G’D BUT THE G’D OF ISRAEL!’

Do you see what happened? This little girl believed in the G’d of Israel. And, secondly, she had the courage to tell her master about the prophet of Adonai. And this great general hears after her and is going to believe in the G’d of Israel! Perhaps you have ever thought: I don’t count for much. Now you know that simple people, children, can be closer to G’d than those who are so important in the world. Just stay close to Him and who knows…. perhaps one day you will make the difference.