Personal relationship with G-d: how do you deal with a serious disease 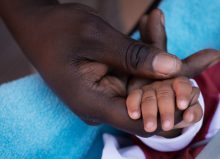 As a baby and later when I was five year old, I have been in the hospital. In that period lays the root cause of many difficulties that I experienced later in my adult life. As a child I was often anxious. As an adult I regularly have received help for complaints such as anxiety, sadness and the feeling that life was heavy. None of the aid workers thought that the reason for these emotional problems were caused in my earliest childhood. Because of my fears I searched my entire life for having control and overview.

That’s why I never found a good balance. I found my protection with G-d quite early. Close to Him I often felt the safety that I missed in my own way. He always has been my anchor. A shelter when things were too difficult for me. During the time that our children were small, I also experienced a difficult period with fear. I was afraid I would lose them. Actually, that was my old childish fear, projected onto them. What I find very special is that around that period I learned in different ways that I had to let go of my fear (for the children).

One of those times I read in Romans, “I have not given you the Spirit to live in fear. I have given you the Spirit to call me as Abba Father.” Then I knew that I had to let go of my fear and surrender to G-d. I prayed then “Lord the children are yours in life and in death and Your will be done and not mine.” From that moment I was able to give my fear to Him. After that I had quiet years in the field of anxiety. Until 2014. Then I got breast cancer. The fear was, in another plane, in full force. Fear of surgery, an uncertain future and fear of dying.

But right through the fear, as also earlier in my life, there was G-d. He carried me and made sure that I, even in the illness, could experience blessings. But the further I came in the process of recovery, the more anxious I became. Not so much for the cancer, but for all the things that I heard around me or in the news. The fear became so intense that it seemed real. Fortunately, I came into contact with an oncology psychologist. I see it as a blessing from G-d that she actually saw what I needed right away.

Because I, as a little girl, had been in the hospital, I missed a basic feeling of safety. That was a traumatic experience. I had suffered from this all my life. The years after I had surrendered my fear, and experienced much less trouble, the traumatic experience was, as it were, in a state of rest. The breast cancer caused it to be present again in full force. She suggested EMDR therapy. During this therapy I recovered wonderfully from my fear. I experienced a sense of security and peace as I had never known before.

G-d taught me through this therapy, “Even when you were small and anxious, I was there. Where you felt unrest and threat, I was the one who had a grip.” I always knew that. But now I was allowed to feel it in the basics. I felt very strongly that I wanted something different in my life. That I want to point people to Him and His mercy. I thought, ‘now the time has come for that.’ But almost simultaneously I got physical complaints. After a few weeks, I ended up with the internist, who wanted to have a scan made immediately.

The result was metastases of breast cancer in many different places. The ground sank under our feet. And the fear, there was more than ever. Distraught I have felt, panicked and also abandoned moments by G-d. My whole life was already with difficulty and trial and error and now this too? But even this time, now that I have been suffocated by fear, there is G-d. How desperate I sometimes feel, he always raises me up, encourages me, says “trust me”. Be silent and know that I am G-d! I have grip!

And that is why I feel hope. I try to look at Him and not at the waves. In general, that works. In His strength. He gives peace despite the circumstances. I ask G-d every day whether He wants to be merciful to me and wants that He want to give me healing. But I’d rather remain ill under His wings, than receiving healing without Him. For in my life I have been able to experience that nothing is as good as a life very close to Him. Because whatever the circumstances are, He is faithful!