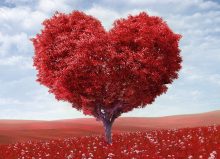 A sensitive heart, among other things, we develop by learning from our own mistakes and sufferings without being stuck in a victim role. That is a difficult process in a human life and we all have to do it bij ourselves. However, we need each other in this process so much in social groups e.g. in a family relationship, in relationships in our congregations and in other social contexts. In this respect, taking responsibility for our own actions and being solution-oriented is also of great importance. Maintaining respect for our fellow man and women we need besides a healthy self-reflection. Prayer here is a great help that the Lord has given us. Prayer also means self-examination in Hebrew. The explanation of the Bible in a Hebrew way can help us.

The Zohar teaches us things in a special manner that can be refreshing. I says that the objects and people in our physical world mean more than what meets the eye; they are merely palpable echos of spiritual realities. It is not only that they enable us to gain an awareness of the spiritual; the truth of their existence is the spiritual truth that they echo. Their physical existence is merely a garment that enables these spiritual truths to be expressed in material terms.

If this is true about creation as a whole, it is surely true of the fundamental element of creation – man. Thus, for example, the relationship between a man and a woman mirrors the bond between G’d and man.

In essence, a husband and a wife are one being; indeed, the Zohar describes their union as the joining of two halfsouls. Nevertheless, this deep-seeted oneness does not always surface. As husbands and wives live their lives from day to day, they often see themselves primarily as separate entities who still need to cultivate and nurture the love that should join hem.

Our sages have told us that the time before the coming of Meshiach will be a time of paradox. On the one hand, we will be able to see the glimmer of the future light. On the other hand, this era will be weighted down by a darkness so palpable that it will prevent the light from being properly perceived.

Our Prophets allude to this state by referring to the struggle which will precede the Redemption as ‘chevlei Mashiach’, the birthpangs of Mashiach. All women who have given birth will agree that the exhilaration of bringing new life into the world dwarfs the intensity of the pain, however great. The birth itself is the most powerful dimension of the entire experience and the most lasting. This is an interesting way of looking at the days we live in. Now an example from this time.

Rabbi Blech and his wife are married 60 years. What makes the explanation in the Zohar above so interesting is the unity between husband and wife that we can also read in the story of this modern rabbi and his wife of 60 years. He says: “In these days the solidarity of bliss seems to be getting shorter and shorter. When I happened to speak about my personal story in Los Angeles, an important Hollywood acquaintance, a special personality, had a smile: “Rabbi, to be married for 60 years, is no problem here, but it costs us usually five of six women.”

The court needs to adjudicate. Oaths are required to substantiate their positions. And then the final ruling is given. They must divide it between them. Neither one wins it all. The resolution is: they must share. Sharing is caring. Sharing is the recognition that “I” is not as important as “we” – and that may well be the profound hidden meaning in the word “wedding”, in which the “we” comes before the “I”.

Sharing is acknowledging that there must be times when your need is greater than mine, when your want requires my wont. Sharing is knowing that two people are not identical but they are still equal – with different desires which deserve respect even when disagreed with.

Today’s world is one which glorifies selfies, self-fulfillment, self-gratification, says rabbi Blech. It is a world in which the word entitlement is supreme – politically, socially and interpersonally. The key phrase is “it is all mine” – and the Talmudic ruling to divide and share is regarded as an ancient anachronism. Compromise is all too often looked at as just another way of half losing – and nobody wants to be considered a loser, even just a little.

Sharing is winning. Living with the creed that replaces “it’s mine” with “it’s ours” does not give half, but almost miraculously enough to let both marriage partners get everything.” (Rabbi Blech at Aish.com).

Our home and our congregations are places to grow into the people God wants us to be: to have a relationship with our Creator and to learn to share, show dedication, be honest, help and serve each other, nurture our marriages and grow in unity as couples and as a community. This is a challenge, but the way we can show the light of the Messiah in a darkening world and see the light with a sensitive heart.