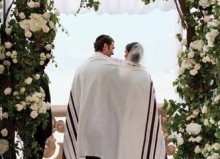 On the Feast of Weeks (Pentecost) we read in the synagogue, the book of Ruth. This young Moabite woman marries Mahlon, a Jewish man who moved away from his country with his family because of a famine. It is the period of the Judges, the 13th century BCE, not long after the entry into the Promised land. Ruth is attracted by the Jewish faith of her husband’s family and decides to serve the God of Israel. Unfortunately, her marriage to Mahlon does not last very long, because Mahlon dies and Ruth stays behind, childless.  Also her father in law and her brother in law died there. Ten years in Moab spent were not very happy because of the losses in the family and her embittered mother Naomi would like to return to her hometown of Bethlehem. Ruth speaks the legendary words: ” Thy people shall be my people and your G-d is my G-d, and she goes along with Naomi. It is the Omer time, time of the Barley harvest when they enter Israel.

In Bethlehem, Ruth met the righteous and respected Boaz, an elderly relative of Mahlon. He says: “May the Lord, the God of Israel, under whose wings you have sought refuge reward you handsomely for your faithfulness” (Ruth 2:12) . Boaz is eligible for kin marriage, as redeemer (go’el) in order to give the deceased Mahlon descendants.  Although Boaz is a lot older than she, she takes the resolute decision, on the advice of No’omi to do Boaz a marriage proposal. They do this when they are together on the threshing floor and her request from spreading the wing of his garment over her. (Ruth 3:9). In this way she actually asks him to marry her.

In a Jewish wedding ceremony bride and groom are standing together under the chuppah (canopy symbolizing the bridal chamber) and together under his tallit, his prayer shawl. The corners of a prayer shawl are called ‘wing’ (kanaf), as a symbol of the wings of G-d. By standing together under a tallit reflects the fact that the couple enters into a covenant to be one and they clearly express that they want to stay under the wings of God. The tassels at the corners of the prayer shawl (tsitsit) refer to the Torah and the couple expresses to accept the Torah and keep it and live accordingly as guidance and responsibility for them. (Numbers 15:38-41). By Ruth’s request to spread his wings over her, she asks for this wedding ceremony.

Boaz appreciates her that she is not running after the young men, but wants to follow the Torah, which is described in-law marriage (Deuteronomy 25:5-10 ) . He praised her for her loyalty to her deceased husband, whose name and heritage she wants to preserve and that she has been so faithful to Naomi, which in turn gives joy to Ruth and shows her faith in God. “My daughter,” Boaz said, ” it is known that you are an Eshet chàjil, a powerful woman.”

Boaz married her and she becomes pregnant and they had a son, who became the grandfather of King David and will be the ancestor of Messiah Yeshua.

G-d has the loyalty of this non – Jewish woman rewarded with loyalty, by participating in the Jewish people. He even included Ruth in the family of his son Yeshua, which is a huge honor! And in length of days they praised her name and Ruth inspires many.

Thus God knows every heart and sees everyone’s grief, trouble, uncertainty and desire. He offers his wings to shelter, for comfort, security, hope and joy.

Also, I lost my husband childless, after ten years of marriage, although not to the death, but to another woman. Faith in this present world is not always rewarded with loyalty … but life goes on and G-d can give unexpected twists.

I was impressed by the Jewish interpretation of the plan of salvation, which is made known by to the Jewish prophets, the teachings of Yeshua and His apostles and teachers. I was excited about it and a few years ago I went to Israel, like Ruth, in the  time of the counting of the omer. I then visited the Temple Mount, on the threshing floor Ruth’s grandson David bought of Araunah (2 Samuel 24:18-25), I told the Gd of Israel that I want to serve him, want to live like the Torah as Yeshua taught and that I would like to join His people Israel. Some time later on day 49 of the omer counting I joined the Jewish Messianic congregation Beth Yeshua. We celebrate the weekly Sabbath, holy convocations and annual festivals. Because this we have already frequently a taste of how Gods plan of salvation. During the service there is round dance and singing. “Sing and rejoice, daughter of Zion: for, behold, I will dwell in your midst” (Zechariah 2:10). And with such a life of a woman of valor or in Hebrew; Eshet chàjil Ruth, I’m encouraged and urged to continue to walk with Gd and live faithful according toTorah. I experience it as joy to discover in Gods Word, loving winks of the Father, under whose wings I can stay. Gems again and again.