The role of Esther 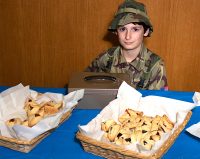 This month we celebrate Purim. It seems that every year it becomes more important in our days to celebrate Purim. The stress and pressure that Israel must endure is growing every day.
From three sides is the pressure coming: from Syria at the northern border, where Hezbollah is a tool to threat. From Gaza with Egypt is becoming more and more a threat. And then the worst of the three: Iran.
The development of a nuclear bomb in Iran is so worrisome because this country is the greatest enemy of Israel and the free world. This country provides the world with terrorists and weapons and hatred.
These enemies of Israel can be compared to Haman, the Jew-hater in the Persian Empire when King Ahasveros ruled the Persian Empire, now called Iran. We know how the Jewish Queen Esther in a special way was able to defeat this Jew-hater Haman. The events were so particularly led by the Lord, that this enemy of the Jews in Persia was destroyed. Haman had evil plans to destroy the people of God, but his evil plans came down upon his own head.
One of the biggest Jew-haters in our day is the leader of Iran: Ahmadinejad.
This Purim 2012 more than ever, we look forward to all the Mordechais and Esthers who will speak out against the evil words and deeds of the Hamans in our days.
There is a war in the spiritual realm and in the visible world that is becoming increasingly nasty for God’s people all over the world and in Israel. This coming Purim let we as women play the role of Esther. After the 14th of Adar, the date we celebrate Purim with joy and goodies, let us continue the role of Esther als long as the modern Hamans make the world more and more anti Jewish and anti Israel. Let us pray in faith and speak words and do deeds that will show righteousness and love and show the God of Israel and Messiah Yeshua.
We can still make a difference today!
We know in the end all Hamans will be defeated! Thanks to the Lord!
Chag Purim Sameach 5772!