The influence of Hellenism in Judaism and Christianity 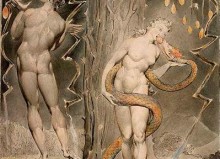 Hellenism had a strong influence in the world during the time of Alexander the Great. Sexuality and the genders became more important and the new ideas of the Greek culture about the genders were the cause of negative remarks in speech and writings. This we find in Jewish and Christian literature.The writings point out the danger of women and their use of beauty and sexual attraction as a weapon against men.Theologians like Calvin said: keep your daughters short. Talking about women he often used a wrong emphasis. The Roman Catholic Priest Thomas of Aquino in second Century wrote that women should be able to study. That was incredible in that time.

We see much struggle about the place of women through the ages and still in our time. But in the Western countries women can study and have often equality with men. However even in Holland women often earn less than men while doing the same job.

In Paradise something went very wrong. We disobeyed and since than we are in trouble. The desire of a woman would be towards her man or men.

I like to say that the choice of believers must be to please G’d and not men/male. This has emerged from Genesis; the curse between men and women. Gen. 3:16 says: ‘and thy desire shall be to thy husband, and he shall rule over thee’. Now this is important to all women. Here G’d shows the root of all misbehavior of women towards men. And right there is also her most vulnerable spot to be tempted. Today we have a new expression for this. We call it: relational bondage. In the beginning of time G’d already mentioned this as the ‘desire of a woman’. Essentially G’d said to Eve: ‘the desire of your heart turns away from Me to your husband and he shall rule over you’. It was her choice. If Eve’s heart would have continued beating for G’d, than He would have had dominion over her. And that is a privilege that G’d appropriate for ALL His children. Only He can fulfill our unfathomable desires. No one else can do that, for he is the Source of Life.

The scripture says (1 Tim. 2:4) ‘the woman being deceived has fallen into disobedience’. That doesn’t say that had she had the malicious deliberate intention to turn G’ds foot down, in the sense that she rebelled against G’d. She said: ‘the serpent deceived me and I ate’. The fact that she had been deceived is confirmed in 1 Tim. 2:14 ‘Adam wasn’t deceived, but the woman, being deceived, has fallen into disobedience’. He knew, or at least COULD have known what he was doing and he did it anyway. Moreover, he kept silent when he should have spoken. There is nothing written about the man. He should have told her.

Tikva Frymer-Kensky (1) says: the profession of Rahab was central. From that position there was salvation. The scarlet cord was the symbol of salvation like the blood of the lambs at the doorposts during the Exodus from Egypt.”

The blood of the lambs is pointing to the blood of Messiah Yeshua and our salvation.

Rahab as a shining example: Jac. 2:25 Rahab ‘justified by works’. This is fascinating according to Tikva Frymer-Kensky. Women have risen in value in the New Testament. This is very important for us as believers who seek the roots of our faith. Today the oppression of women is unacceptable. The New Testament says it’s unacceptable.

In our days we have to be careful how to find a balance when we want to have equal treatment for men and women. Women want to be equal to men. No more next to men, but identical. Just the same. This was certainly not the intention of G’d when creating His plan for men and women.

It was Satan’s plan to make women be silent in order to make her completely powerless in the life of men. It would deprive men of the help that G’d had carefully designed for him from the beginning of time. Over the centuries women have proven to be just as capable as men. But a woman who takes her place, referred to by G’d in Proverbs 31, and performs her tasks with power; she will be a full partner in both marriage and church.

How to overcome this ingrained part of the curse of Genesis? If a woman starts seeing God’s plan and purpose of marriage, she can be sure of the anger of the opponent. If a woman, apart from the man, will reach out to God to fulfill and heal her, she will be released. She will be able to love him more, because she is no longer dependent on him, but on Him. They now will be able to conform more to her husband because she is no longer dependent on him. Isn’t that exactly what feminists really liked to achieve? This goes far beyond empowerment, assertiveness, self-defense, and all those things that deplete her. There will be room for both and so both men and women can really be set in, in the plan of G’d. No unilateral submission of women. But a powerful counterpart star for men who don’t benefit from an ever-nodding spouse, who in the long term will only call contempt. Soon enough men will be taken away from behind their facade of complacency.  Thus she will be a real help to him. For both this means liberation. Her husband can ‘trust in her’ says Proverbs 31.

Women are not made to be submissive to every man. Not even in church. Also this curse is dismantled, because Yeshua has restored women to their right place. He made her a full participant in his church. Abraham obeyed Sarah by G’ds command. ‘She helped him seeing something he wasn’t able to see himself. Gen. 21:12 says: ‘Don’t let it be grievous in your sight (..) in all that Sarah says to you, listen to her voice’.

They were mutually submissive and that is what the Bible teaches us from Genesis to Revelation.

No Hellenism but subservience to G’d.

Although we have landed on the other side of salvation, the opponent still uses the same tactics. If he cannot rob the redemption from us, he will try to paralyze the plan of G’d. He will try to put women out of action. Then we will hide for each other, like in Gan Eden. En we hide for each other in the church. With the purpose the keep people away from us, to keep them at a distance. Under the influence of Hellenism, we have become slaves instead of free men and women.

Throughout the centuries, G’d appealed to women. Inspired by divine wisdom and by courage they have been able to reverse many horrible oppressive things in many countries. There is still so much to be done.

Yeshua has come to change all this. Born of a woman he crushed the head of the opponent. Today restoration has set in in Messianic Jewish congregations. May we women be co-workers for G’d and stand up in the church, like a Proverbs 31’s  Woman of Valor of in Hebrew: Eshet Chayil, doing the will of G’d In humility and submissive to one another, as to G’d. Let us take the place meant t for us by Him, in our convocation as holy women. Then we will be more than conquerors through Him who loves us. Only then the coveted unity in the church and in our marriage will take place inside. Not beating each other, but beating the opponent.

Just by taking the place that is meant to you in Him. That is Yeshua’s heart desire, ‘that they may be ONE, even as we are’.

1997 Originally published in English under the title Fashioned for Intimacy. Published by: Regal Books, a division of Gospel Light Publications, Ventura, California.