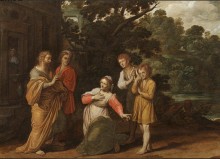 This is the story of a wealthy Shunammite woman that appears in the life of the prophet Elisha in a time of great poverty.We read this story in 2 Kings 4 :8-37 of the woman who lives in Shunem. Her name is not mentioned once, and when this happens we can assume that this is not important to the story. The location of the woman is the most important here. This is a story in a time when women and often also poor men did not  have a position to say much. This woman behaves independently and freely. This is remarkable and has a message for us today. In the days of this story the prophets traveled across the country like Elisha does here. He frequently traveled through Shunem and was invited then by the woman and her husband. On a certain day, the wife asked her husband to build a room on the roof for the prophet, so when he passed Shunem and visited them to eat, he could stay for the night. That is what happened and Elisha went over with his servant Gehazi. At a certain time Elisha instructed his servant to ask what he could do for the woman. The prophet did not speak directly to the woman, but he told his servant to ask her what she wanted.

The woman answered, I dwell in the midst of my people. That is an unusual remark, because normally a woman lives with the family of her husband after her marriage and within his tribe. This woman now lives with her own people. The Prophet asked his servant if there still was something they could do for the woman and the man replied that the woman had no son. The woman responds reluctant on this prophecy of Elisha, but the following year she gets indeed a son. Later, at a certain day, when the boy grows older he complaints about an headache and later that day he dies. The woman rushes immediately to Elisha. She said nothing to her husband and rushed toward the prophet on Mount Carmel. (2 Kon.4: 25)

When she arrives at the place where Elisha lives, his servant Gehazi asks her how she is doing. The woman replies that all is well. However, when she comes to Elisha she kneels at his feet. The servant wants to remove her, but Elisha said at his servant to let her be, because she is so distressed. God did not reveal the death of the boy to Elisha. The woman says reproachfully that she did not ask for a son and she did not want to be misled by Elisha.

Elisha tells Gehazi to go to the dead boy and to lay his staff on the child, but the woman wants Elisha to go with her and Elisa gets up and follows her. (Verse 30) The woman acts completely thorough and does not get distracted. She wants the prophet to follow her and so he does. Gehazi put his staff on the face of the dead boy, but the child did not wake up from the dead. It was Elisha who could raise him from the dead and the woman believed this and therefore wanted Elisha to go with her. Elisa raised the boy from the dead.  He gave the woman the child back and she came to him and bowed down to Elisha and showed him respect. Later we see this woman again in the life of the Prophet when he advises her to leave the country because there is famine. She leaves her country with her family and after seven years they returned to her property. She goes to the King and asks her land back. The King knows at that time that she is the woman whose child was raised from the dead and that she had given Elisha the prophet hospitality. The King gives her property back and even the value of the years that she was not there and other people took care of her land. This was again unusual. 2 Kon.8: 6

The Shunammite woman is acting quite remarkable in the time she lived.

She never asked for a child from Elisha. She did not tell her husband that she went to Elisha when her son had died. She was the owner of her own property and lived in the midst of her family. Numbers 27:7

“Her ownership of land gives her independence from her husband whose permission she need not ask. The Shunammite may be an example of how women act when the economic constraints of patriarchy are removed. This is why she is identified by locale rather than by name or as “Mrs. Somebody.” Her location remains her identity in a way that most women’s do not. It is her village of her father’s household and the one where she lives as an adult woman, the site of the land she owns. She is a woman of place and, by contrast, shows how significant the lack of such place is to most women’s history. The limitation of women’s property rights is the economic linchpin of patriarchal structure; it made women dependent first on their fathers, then on their husbands, and, ultimately on their sons. Even the humanitarian injunctions of the ancient world to care for widows and the fatherless were an outgrowth of this male monopoly: if widows could inherit land, there would be no need for humanitarian injunctions to care for them. The characteristic determination and boldness of the Shunammite may be a lesson on the freedom that property bestows. It is also a window onto the way at least some women successfully negotiated with prophet and king (the male power structure) despite their lack of official autonomy or authority.” (Tikva Frymer-Kensky page 73)

May this new Biblical year 5774 help us to see all that the Lord has done for us in the time we now live. How much more opportunities we have, especially in the western countries of the world. How we can try to help women who are not so fortunate. This is also a way of Tikun Olam: repairing the world.

Literature: “Reading the Women of the Bible” by Tikva Frymer-Kensky, page 73.